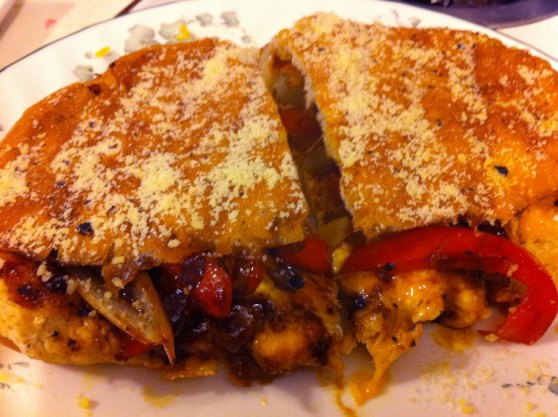 I was so tempted to order in tonight. I even had something picked out, a list written up and my hand on the phone. But then something clicked and I thought, “Save your money, girl! Surely you can whip something up quickly that’s tasty and better for you than that fast food crap!”

So I looked in the fridge and came across the following items: chicken, red bell pepper, white onion, barbecue sauce, mayo and cheddar cheese. Looking in my lunch bag that I brought home from work, I found a roll I never used for my dinner (a really large, soft roll). The wheels started turning.

Still looking for inspiration, I found myself staring at the tv as one of my favourite Food Network shows played (Diners, Drive-Ins & Dives). One  of the restaurants was making panini-style sandwiches with focaccia bread. It looked amazing. Hey, wait… I don’t have focaccia, but I have that football-shaped roll. SWEET! Here’s what I did…