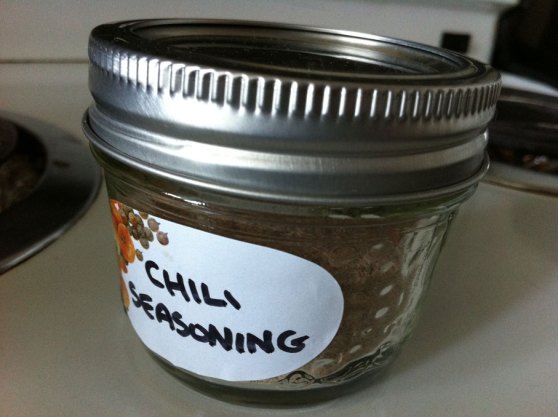 Since I’ve been cutting back on my sodium intake, I’ve been finding it challenging to find spots to cut back on salt. I never really used to cook with a ton of salt to begin with — or so I thought. I suppose I should actually say that I never really added extra salt to cooking because it already exists in so many of our foods already!

Take a look at canned tomatoes. While I understand that sodium is used a lot in preserving foods, I know they have cut back on some things, marking them as ‘reduced sodium’ or ‘lower sodium’. So I compared two cans of diced tomatoes of the same brand. For half a cup of the regular brand, it was about 450 mg of sodium, but for the ‘reduced sodium’ can, it was only 25 mg. What a difference!

I didn’t even want to guess how much sodium was in a package of chili seasoning. Too much, I’m supposing. So I scoured the web, took some advice from a few different recipes and came up with my own chili seasoning to cut back on the sodium levels. Keep in mind that this is relatively tame compared to other seasonings, but in higher quantities in the crockpot, it can have a bite. My tastes prefer mild seasonings, so bump up the hotter ingredients if you prefer it spicy!

Here’s what I did: