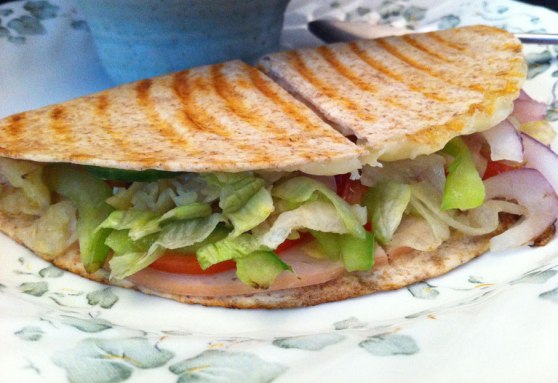 Despite buying a lot  of frozen meals as of late to try, I have been making fresh food, too. I promise. I’ve been trying to reintroduce some sandwich options into my meal plan. I’ve been having some success in doing so by using the Weight Watchers and PC Blue Menu bread products. In this particular case, I had bought a package of the Weight Watchers whole wheat tortillas and decided I wanted a wrap of some sort.

Unfortunately, they’re a bit on the small side, so it was hard to wrap it like a traditional wrap. So instead, I folded it over into a sort of quesadilla-style sandwich. Here are the ingredients I stuffed into it:

The only reason I used two slices of cheese is because I wanted to have cheese on both sides of the tortilla to act as the ‘glue’. Next time, to save some fat, sodium, etc., I will probably just shred up an ounce or two of light old cheddar instead — with shredded cheese, a little goes a lonnnng way! I even paired it up with a bowl of my curried tomato pepper soup (pictured below). YUM. 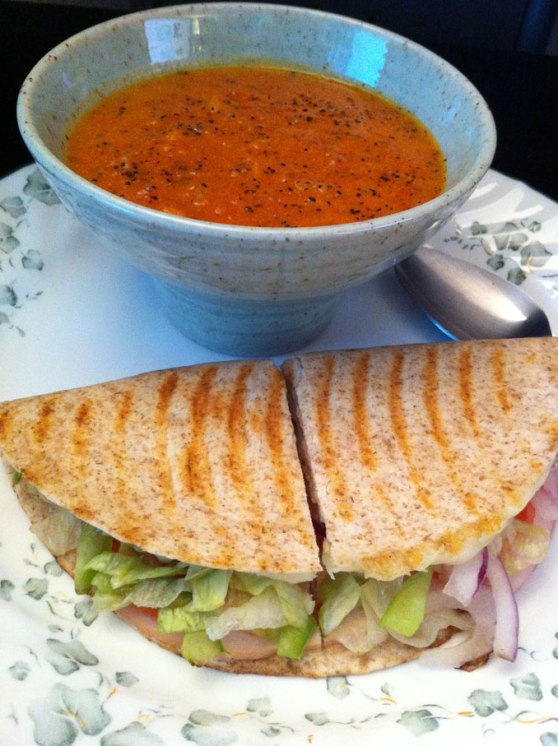 With that in mind, let’s talk about an actual quesadilla: 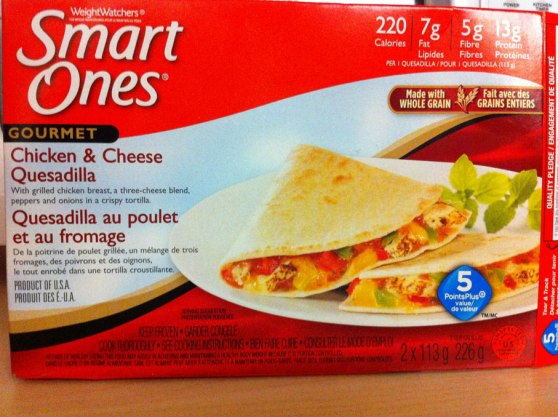 I’ve also recently tried the Weight Watchers Smart Ones chicken & cheese quesadillas as a quick and easy meal at work. Each box comes with two, so it’s economical. Also, unlike some frozen meals, these things are tasty. Very much so, in fact. I had to restrain myself from having the second one right after the first (having a second one would defeat the purpose of buying “lighter choices”).

I found the taste to be excellent and the sandwich to be pretty filling, though I usually try to also have some fruit or a salad with it.

Between the two, the carbs and sodium seem to be the ‘trade-off’ here. The pair are otherwise comparable and can easily be matched up with a side salad or light soup. The homemade one could be made even better if you were to use a lean, fresh meat like sliced roasted turkey or chicken that you cooked yourself. Both sandwiches are quick and easy to make up. My homemade version doesn’t even need an indoor grill or sandwich maker. Use a grill-pan (one of  those non-stick ones that has the ‘bumps’ to give food grill-like marks) or just a frying pan with some non-stick spray. Easy-peasy! 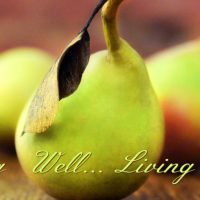 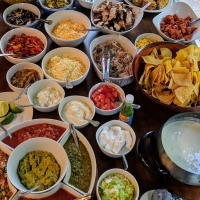