I don’t know about you, but I have a horrible time judging how many potatoes to cook, even for just two people. I always end up cooking too many, or find myself wishing I had cooked up more — though I tend to err on the side of caution and the old family motto of better to have too much rather than not enough!

This week, I found myself in this very predicament. I had two bags of mini white potatoes and thought, “I’ll just cook them all up!” Well, that’s about 2 lbs of potatoes. For two people, I really should have been thinking this through a little bit. We couldn’t possibly get through all those potatoes and still have the rest of the leftovers (chicken, veggies, etc.). So, yesterday, I found myself staring at about a pound or so of cooked potatoes and nothing to go with them, as the rest of the meal components had already been devoured.

What on earth was I going to do with these potatoes?

I had a revelation while at work: Mom used to make us salmon-potato patties for breakfasts on the weekends sometimes with canned salmon. Now, as I’ve likely said before, I’m not a seafood/fish fan, but I can eat canned tuna or canned salmon. I always have cans of low sodium tuna in the pantry. Salmon, not so much — I really get grossed out picking out all the icky bits in salmon, so I tend not to buy it. I’m very particular about salmon — it can’t have any of those little bits in it (you know the stuff). Anyway,  I digress. I got thinking: why not do the same thing but with tuna???

I also had some uncooked veggies in the crisper that were needing to get used up soon before they went bad, so I decided to put my own twist on these. Mom’s were always salmon and potato with salt and pepper for seasoning. She may have even added onion to hers, but I don’t really recall. That was a lonnnnng time ago! And seeing as I can’t eat onion right now, I was looking for other ways to spruce these patties up. So here’s what I did…

I made these up last night but didn’t cook them. They’ve been sitting in my fridge and will get cooked up for brunch tomorrow for hubby and I — but I just whipped one up for my breakfast as a taste-test this morning and I have to say, this might be one of my favourite ways of eating tuna and using leftover potatoes now! I hope you enjoy and remember: adjust seasonings to your tastes! You might like green onion or onion in yours, or dill and a splash of lemon, or some other  seasoning. The point to this is to make leftovers into something new and enjoyable.

EDIT: To make these a little more tasty, add some seasoned salt to the breadcrumbs. 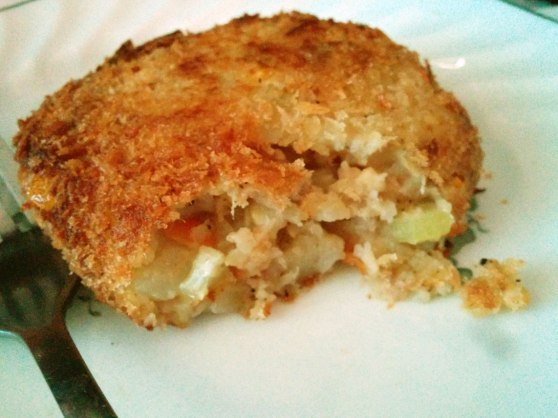