With Christmas festivities behind us, I’ll admit now that I’m feeling rather blaaaaaaah. All that rich food, things that I don’t normally eat, has wreaked havoc on my body. I need to get back on-program. Sure, tonight, we’ve got an evening of filo and puff-pasty hors d’oeuvres, wine and junk food, but that doesn’t mean I can’t eat well prior to that and follow up with that in the new year.

Last night, we swung by the grocery store to pick up food for the next week and food for tonight’s festivities. Sure, hubby and the kitties and I are staying in, but we’ve got Season 3 of The Walking Dead sitting here, as well as Thor 2 — neither of which we’ve seen yet, so we’re going to have a fantastic night of superheroes and zombehs! 🙂

Where was I? Oh yes, food. So I picked up some of the usual suspects such as mini spanikopitas and sausage roll bites, but we also picked up a few of the Presidents Choice line of finger foods, which I will probably write up a review for later. But then I thought, “What? Are we going to eat hors d’oeuvres for days??” So I grabbed an econo-pack of ground beef and the fixings for tacos, as well as two pre-cooked chickens and some fresh veggies and bread from the bakery section.

So when I wanted breakfast (brunch at this hour, I guess?) I stared at the options and considered what would be a good energy booster without anything too heavy. Then it hit me: chicken salad sandwich!! Now, I was never a big fan of chicken salad sandwiches when I was a kid. Everyone tended to make them with chicken and mayo and not much else. It just tasted like mayo-covered goopy stuff to me. So I figured, why not add some texture and flavour?

Here’s what I did…
END_OF_DOCUMENT_TOKEN_TO_BE_REPLACED

It’s so hard to eat well at work sometimes. The cafeteria and fast food options are always the quickest and easiest, it seems, so sometimes it’s easy to forget about having a good, balanced meal at work. But a little bit of planning on the weekend might help through the week, if you’re lucky! See the image above? This was my lunch at work today. In fact, I’m just finishing up the soup now. (Sorry that the image is a bit blurry but by the time I realized, most of the food had already been devoured!)

Make-ahead meals are not only better on your pocketbook, but also on your morning prep and your waistline. I sometimes find it hard to plan my day’s meals nutrition-wise if I know I’m going to grab “something” at the cafeteria later because I didn’t have the foresight or time to pack something before work.

Today’s lunch consisted of things I prepared this weekend. Let’s take a look at each one and how easy it was to make each one…

END_OF_DOCUMENT_TOKEN_TO_BE_REPLACED

This recipe came out of a desire to cook something “different”, yet comforting and was a total, pleasant surprise. It was based on a recipe from Antony Worrall Thompson recipes (LifeStyle FOOD). I substituted what I had on hand. Next time, I would see about adding some root vegetables such as carrots and potatoes (omitting the rice) and/or some chickpeas (if I like them?) for some more substance. I’m not complaining! This was a really yummy dish. But I’d love to continue to play with it to see how I can make it better.

END_OF_DOCUMENT_TOKEN_TO_BE_REPLACED 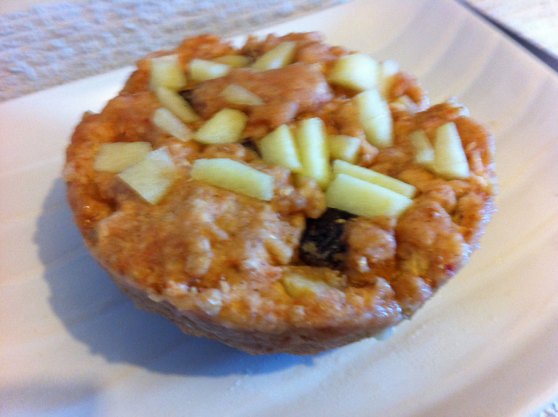 It’s been too hot to cook, too hot to bake, but I’ve had a craving for muffins. So of course, I went scouring through search after search, just making myself more and more hungry, until I stumbled across a recipe called “Blueberry Muffin for One”, which gave baking instructions for both the conventional oven, as well as the microwave!

I didn’t have all of the same ingredients, so I played around with it a bit and substituted some things out with what I actually had. Here are the results… END_OF_DOCUMENT_TOKEN_TO_BE_REPLACED

My husband and I were introduced to Indian cuisine many years ago and still love it. Although I cannot handle anything too spicy, due to a set of very sensitive tastebuds, I find myself going back again and again for one favourite: butter chicken.

Lately, we’ve had some difficulty getting our favourite Indian restaurant to make our butter chicken orders mild. Maybe they got a new chef, but at some point, whenever we ordered butter chicken, if we did not stress “not spicy” or “very mild”, we would get it delivered in one flavour: “too damned spicy for my palette”. (Insert pouty-sad-face here.)

As a result, I started whipping it up at  home. Sadly, I have not been brave enough to do so from scratch. I cheat!  END_OF_DOCUMENT_TOKEN_TO_BE_REPLACED