Sometimes, you want a certain taste or dish, but you don’t want it done the “same old way”, right? I was feeling that way about fajitas and tacos. I love them, don’t get me wrong, but I was wanting them done up some other way. I considered a casserole version but then I poked around online and saw a recipe for a cheese, broccoli and chicken stuffed wreath made out of crescent roll dough and thought, “Ah ha! This is what I’m looking for!”

Also, just a note:  I have a tendency of using fajita seasoning instead of taco seasoning, even when we’re having tacos. It’s a personal preference. Use your own. 🙂

Here’s what I did:

END_OF_DOCUMENT_TOKEN_TO_BE_REPLACED 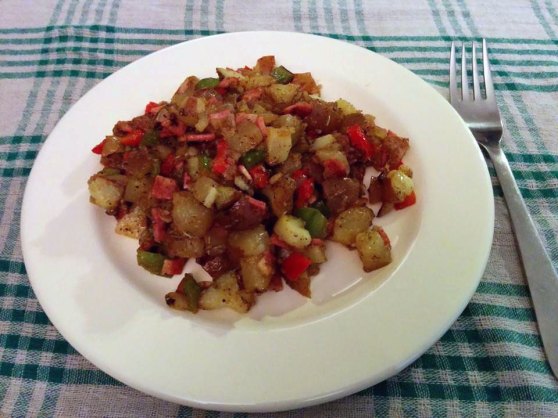 Sorry I’ve been gone so long! The last few months have been a little crazy but I’m still here, I promise. 🙂

So we’re days away from Christmas. Comfort foods are all around us. I’ve been to several restaurants lately and have been left feeling like a balloon from all the salt. I wanted a tasty breakfast for hubby and I this morning but one without all the salt. So I made a lightly curried potato hash. It’s a bit higher in the carb area because it’s based on potatoes, but you could cut back on that by halving the portion and serving with some fruit, a nice crisp salad or some eggs. The nice thing about breakfast hash is that you can adjust how much you have in a portion simply by serving it as a side rather than the main dish.

It is a bit high in fat — to cut back on that, try cutting back on the butter and oil, maybe trying to use a non-stick spray instead. (I might try that the next time I make this.) The sugars are primarily from the potatoes. The  onions and red peppers have a bit of sugar as well but compared to the potatoes, it’s not too bad.

Here’s what I did…